Michigan Biker Law was created in the 1980’s by attorney, Jerald N. Aaron. “Jerry” as he preferred to be called by his clients and fellow riders, realized there was no quality legal representation for motorcyclists in Michigan. Motorcyclists received low priority under Michigan law, just like they did from attorneys. Jerry’s goal with Michigan Biker […]

Michigan Biker Law was created in the 1980’s by attorney, Jerald N. Aaron. “Jerry” as he preferred to be called by his clients and fellow riders, realized there was no quality legal representation for motorcyclists in Michigan. Motorcyclists received low priority under Michigan law, just like they did from attorneys. Jerry’s goal with Michigan Biker Law was to create a firm, solely focused on protecting and aggressively pursuing the rights of motorcyclists in Michigan. Jerry and the firm were featured in “Corp! The Magazine of Successful Business,” in 1999

The increasing popularity of the cruiser motorcycle has led to more and more people taking to the street on two wheels. It has also resulted in increased traffic related accidents involving bikers and automobiles. Birmingham attorney Jerald Aaron noticed this trend a decade ago and has become a biker advocate, forming 1-800-MI-BIker.

❝About 10 years ago, I had a Harley Davidson. My sister was dating a guy who kept saying he wanted a motorcycle. He went out and bought one and he rode over to my house one day and asked if I was going to the swap meet at the State Fair Grounds,❞ Aaron says, ❝We went, and what I saw was a coliseum full of motorcycle riders. There were thousands of them.❞

A couple of weeks later, Aaron was at his insurance agent’s office, which was inside of a motorcycle dealership, talking about coverage.

❝The agent said your car insurance covers you if you are in an accident against an uninsured motorist, which is not true,❞ Aaron says, ❝I explained to him that he was wrong. Motorcycles and motor vehicles are different under Michigan law. These misconceptions and those about bikers in general is what prompted me to get into biker law.❞

After representing several biker on accident cases, Aaron decided to form the Michigan Bikers Association. Returning to the site of his original inspiration, Aaron started going to the swap meets, set-up a booth at them, and so far has signed up nearly 10,000 bikers.

Membership in the Michigan Bikers Association is free of charge. When signing up, you simply fill out a form and you will receive a newsletter, literature on your rights as a rider, an ID card, as well as a magnet that can go on your refrigerator or your gas tank.

The owner of a 1987 Harley Davidson Low Rider, Aaron is not only an advocate but a rider as well.

❝I’ve represented Detroit Motorcycle Club members in criminal cases and that has led to personal injury work for them as well. I understand the lifestyle and attitude and likes and dislikes,❞ he says ❝Suits and ties don’t interest these guys. They want to know ❛Do you ride?❜ ‘❞

❝I can relate to these guys. I think they understand the danger of riding a bike, and they don’t obsess over the money as much as my other clients do,‘❞ he continues. ❝Bikers understand the risk and they are much more appreciative. I would rather represent a motorcycle rider than anyone else.❞

According to Aaron, the majority of motorcycle accidents are caused by automobile drivers. One out of every two accidents involves an automobile making a left turn in front of a rider and says ❝I never saw him.❞

❝IWe go against the insurance company for the driver of the automobile,❞ Aaraon says. ❝Rider injuries are usually extensive and require a great deal of rehabilitation.❞

Handling an average of 50 to 100 cases a year, there is no shortage of clients for Aaron’s practice. The recent cruiser bike craze has placed more motorcycles on the road. The cities in metro-Detroit report the most motorcycle accidents and registrations are in Wayne, Westland and Garden City.

Founder, attorney, and motorcycle enthusiast, Jerry N. Aaron, passed away on April 22, 2021. One of Jerry’s bequests was for Michigan Biker Law and his legacy as “The Original Motorcycle Lawyer” continue to benefit the Michigan motorcycle community even after his death. Attorney, Larry R. Maitland II, having worked with Jerry in the past, is now fulfilling those wishes. After Jerry’s passing, Larry became the owner of Michigan Biker Law and he is thrilled to be a part of firm and the biker community. After 35 years and representation of thousands of biker clients in their time of need, Michigan Biker Law remains the only law firm in Michigan, specializing exclusively in motorcycle law. 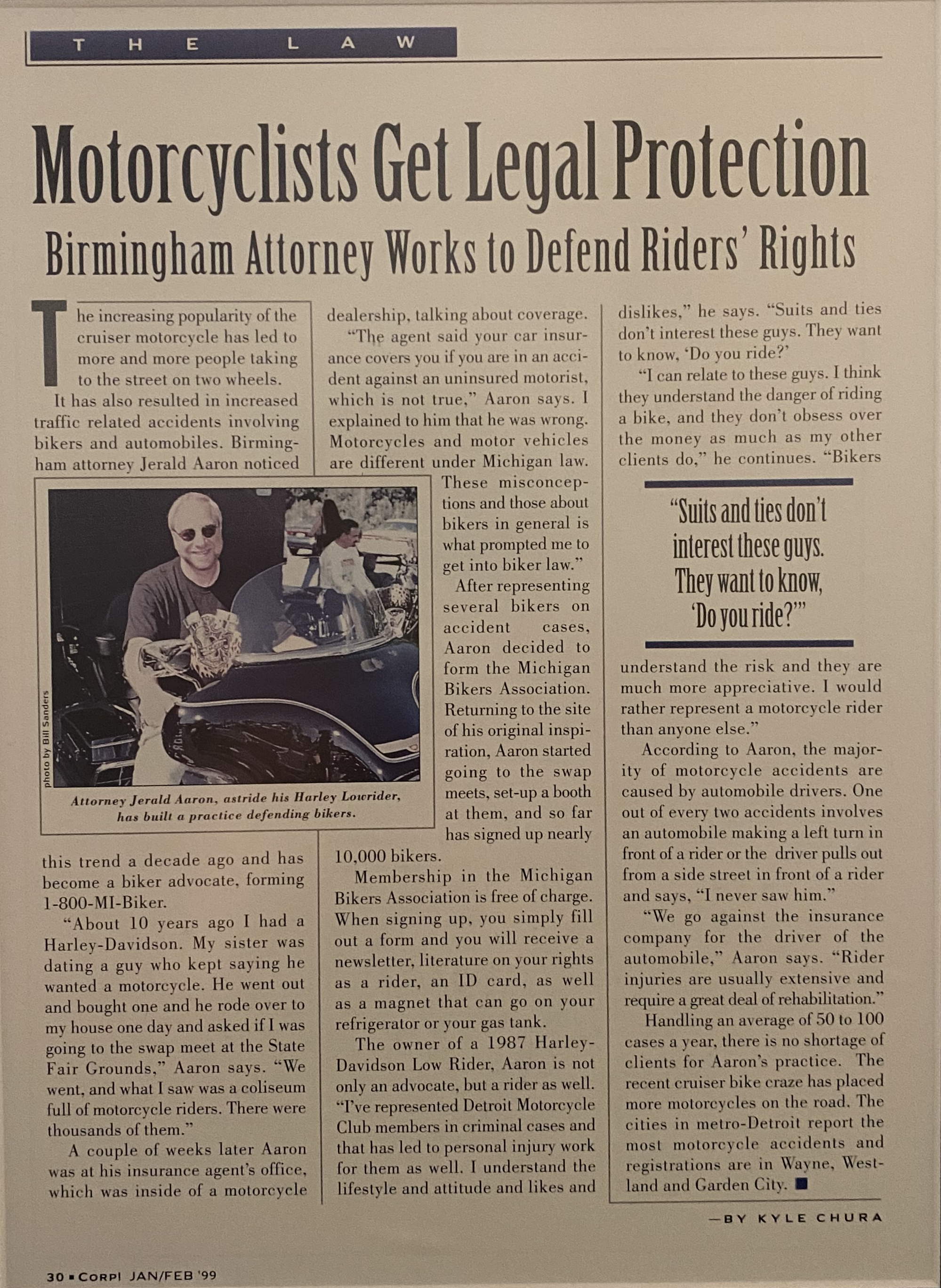